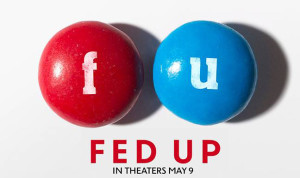 I finally had the opportunity this evening to watch Fed Up. It was just released in Hawaii today and my wife and I attended the second-to-last showing. My overall impression of the film is that it had a terrific message, was expertly crafted, and above all else, was very easy to follow. I feel a general audience will learn a lot of from the film and help them start asking some important questions as well as have some important discussions.

I like how the filmmakers touched on the biochemistry enough to debunk the myth that carbs are just energy and fat makes you fat. It was demonstrated how sugar causes insulin to raise which promotes fat storage since insulin is the “fat storage” hormone. I would have liked to see more about how the various macro-nutrients are used by the body. The one example with almonds was interesting, but I feel this was a missed opportunity to further squash the calories-in-calories-out (CICO) mindset.

The documentary had provided several families with a camera to record intimate moments. I feel this helped bring the issue to life by showing that “fat people” have feelings and do care about their health. I found the foods the families consumed appalling, but given the amount of stuff I read about health that is no surprise. I see similar things on shows such as “My 600 lb. life” on TLC. Not one damn vegetable in the whole show and nothing but processed, processed, f’ing garbage! But hey, at least it is Low-Fat! 🙂

I feel the film touched on many important issues surrounding this epidemic: the processed garbage we consume, how much added sugar is in our food supply, the USDA’s Conflict of Interest of supporting agricultural subsidies and promoting a “healthy” diet, the lack of a Daily Value upper limit for sugar, the lobby and the $$$$, the human factor of the obese, and the complete inability of our government to do what is right by the people and doing what the guy writing the blank checks asks them to do.

I get what the film set out to do and I think it accomplished that well. I think the film will bring a much needed discussion to the forefront. I think they touched on everything enough to raise awareness and avoided coming off as fanatics. Dr. Lustig’s message is on point and he comes across very powerfully in this film. If you haven’t watched his YouTube videos on sugar you can do so here and here. I am also very pleased that Gary Taubes was featured in the film. I believe that his presence will give credence to the points he makes in his articles and two amazing books on this subject. Dr. Hyman was terrific in the film and provided some terrific moments that move-goers should find interesting. I feel Katie Couric was a wonderful guide through the Fed Up journey. She is a trusted name who means business and no doubt her promotion and involvement in the film is huge.

While I don’t agree with the “big-tobacco” tactics employed by the food industry, I feel the role the government played was understated in the film. The government was directly responsible for being co-opted into accepting, and continuing to espouse the benefits of a low-fat diet for the entire country. The government’s lack of ethics allowed its members to be influenced by the companies to alter dietary recommendations, directly lining pockets in multiple industries (Agro, Food Processing, Pharma and Fitness) at the cost of our health. Luise Light‘s story is a prime example of this corruption and conflict of interest at the USDA.

The processed garbage push was primarily due to its low-fat and our misguided belief that dietary fat is bad. Later, while continuing to vilify dietary fat, they started seriously promoting heavily subsidized “whole-grain”. The thing is “whole grains” are primarily found in processed products such as bread, cereal and pasta. You don’t go to the store and buy “whole grain” usually as you would sugar or milk. Of course this excludes products like oat, quinoa, rice, etc. which might be whole grain but are not promoted as whole grain the same way that wheat is and incorporated into nearly all of our “food-stuffs”.

If I am a consumer who has been told that fat will make you fat and give you a heart attack and that whole grains are important, the processed garbage starts to look like health food. We only have government to thank for letting consumers get so god-damned about what is good for us, we eat Red Vines because they are Low-Fat and must be healthy. I use Red Vines as an example because I actually did that when I was about 17. I was like, awesome, these are healthy and they are a “fat free food”. SCORE!

Let’s end this by saying that this is a game changing movie. It provides enough to get people interested and raise awareness, yet it did not become boring or feel like a constant repetition. It showed that the current system is broken and that the people need to get FED UP. That is the only way to make our government do its job. It will only act when we stop enabling their bullshit and put down our collective feet. It’s time for a government Intervention [queue Intervention theme music].