The past few nights I’ve been conducting targeted search queries on Google aimed against specific websites looking for topics of interest related to the Great Fat Debate.

One of the things I stumbled on was a presentation titled an “Overview of the food science behind fatty acid technology” which is found on heart.org at the following location.

I found the brief extremely informative, yet disturbing. The brief is attached at the bottom of this if you would like to take a gander.

From the functions of Palmitic Acid (palm oil, tallow, butter, cheese, milk) slide, it is labeled as a saturated fat which is very stable in storage and frying. It lists the functions which it provides to foods and then states “BUT, ↑ LDL-cholesterol, ↑ heart disease”. It decides to make no mention of the fact that this fatty acid also raises HDL cholesterol. As I mentioned in my post yesterday, saturated fatty acids (SFAs) raise both, HDL and LDL. Of particular importance is the fact that the SFA results in an increased LDL particle size. Research has shown that the small dense LDL particles are the ones which are atherogenic and contribute most to atherosclerosis.

The next slide discusses the saturated fat Stearic Acid (tallow, cocoa butter, animal fats, etc. ). The functions include very stable storage and frying, cooking uses (form margarines and shortenings, spreads, creaming for baked products) and then lists “Neutral health benefits”. That is right, no increase in heart disease, merely “Neutral health benefits”. It is worth mentioning again that this slide-deck is present on the American Heart Association’s website. I observed the same thing for Stearic Acid on the USDA’s site last night. During a review of the 2013 Annual Report for Research Project “MACRO- AND MICRONUTRIENT MODULATION OF BIOMARKERS OF CHRONIC DISEASE AND INDICATORS OF NUTRITIONAL ADEQUACY”, it stated the following:

Of course they are off-base a tad by not addressing LDL particles and putting so much into the impact on LDL being so important. On the other hand, the food-makers need to find a way to show that this is “healthy” so they can use it in food production. Without a solid fat, a lot of the products today would be a mess or an even worse freak of nature.

Getting back to the subject at hand though, the next slide goes into the awesomeness that is monounsaturated fats (oleic acid). It is stable (not very stable like saturated fats) has very limited function in foods as it is liquid at room temperature and says it has neutral to positive effect on health “↑ HDL cholesterol (good), ↓ LDL-cholesterol”. Notice in this case how monounsaturated is specifically mentioned as raising “good” HDL though several SFAs raise HDL cholesterol even more.

The last slide I will cover more in depth is the Polyunsaturated Fat slide. Here is the fat they tout as the one that will save us all, yet its functions in food are minimal (liquid at room temperature) and they admit it is “unstable in storage and frying”. Linoleic is listed as a small amount being OK for flavor and Linolenic being the main source for off-flavors and rancidity. Yum, it sounds like we should be eating more of that. It also states that it lowers, total and LDL cholesterol while raising HDL which jives with current dietary guidance.

The brief is very interesting and goes into Trans Fats, Interesterification (The chemical version is scary shit) and the targets for different food products (salad, cooking oil, frying, margarines and shortening).

Bottom line, we produce too much oil not to use it. That is the reason that adulteration of lard starting occurring back in the late 1800’s. It lowered the price of lard and gave us something to do with the cottonseed oil we were producing. Another slide-show on the American Heart Association website titled “Processing and Stable Oils” from 2006, shows the following chart: 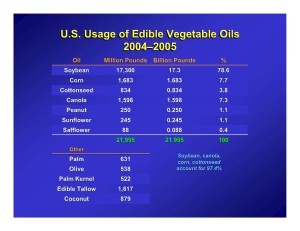 As long as we continue to produce this much vegetable oil, we will always be told that polyunsaturated fat is “healthy” for us because it not being good for us equates to an “unhealthy” economy.